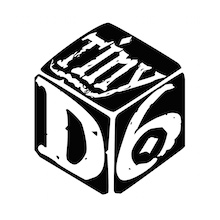 Tiny Frontiers: Mecha and Monsters is the first expansion to the science fiction role-playing game, Tiny Frontiers. Utilizing the minimalist, swift and flexible ruleset of Tiny Frontiers, you take on the role of jockeys who pilot massive robots, defending the world and cities of man from threats, giant aliens or monsters and much more!

This book contains numerous "micro-settings", small, evocative settings designed by industry veterans, fiction authors, and top level talent! Micro-settings allow you to get right into the thick of the gaming with minimal prep, and loads of fun! You can play without Tiny Frontiers, but adding Tiny Frontiers to your game dramatically expands your options and the stories you tell!

What are you waiting for? Get Stompy!

A second edition of Mecha & Monsters is coming, but the first edition is still available both online and in local game stores!

"SUPER FUN! Always wanted to play a sweet mech rpg and this fulfills the need and then some." - Michael L., 5-Star review on DriveThruRPG